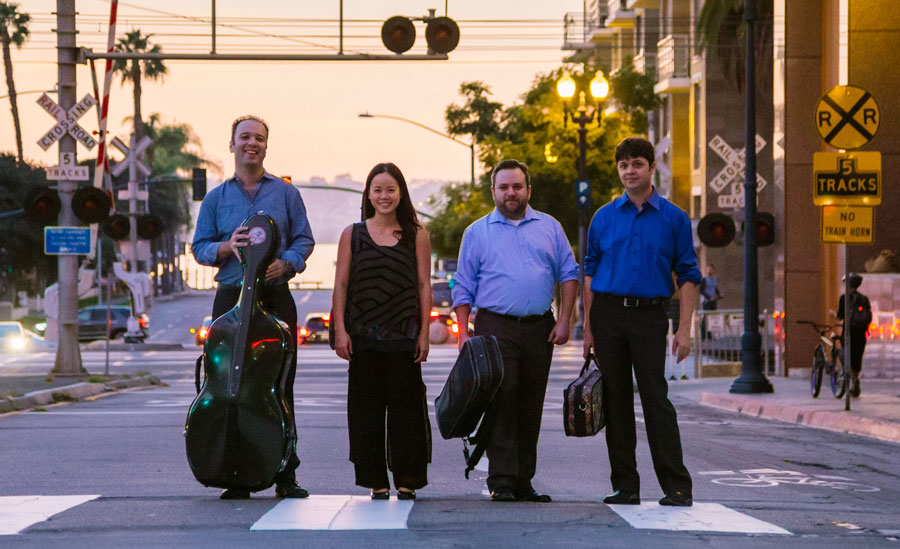 The Hausmann Quartet and Maritime Museum of San Diego are excited to partner to present the seventh season of Haydn Voyages: Music at the Maritime, a quarterly concert series performed aboard one of the Museum’s ten historic world-class vessels, the 1898 steam ferryboat Berkeley that operated for 60 years on San Francisco Bay.

Concerts aboard the Berkeley, a National Historic Landmark docked in downtown San Diego next to Star of India, explore the evolution of the string quartet through the lens of Joseph Haydn’s quartet cycle. Part of the vision for the Haydn Voyages series is for the Hausmann Quartet to perform the entire Haydn cycle of 68 works. Their scorecard now stands at 37 quartets, or 54%.

2022 season opened on February 6 with Stars Align, a program featuring two of Haydn’s sunniest quartets alongside works by Leila Adu-Gilmore and Germaine Taillefaire. The season continues September 18 and November 6.

The programming and performances by this accomplished young foursome set his works alongside those of master composers from our own era and stretching back to Haydn’s musical ancestors. As the father of the string quartet and one of history’s most innovative composers, Haydn is an ideal guide to this exploration of some of the most powerful, creative music ever written. The press has noted the “expertly varied programming of the quartet’s Haydn Voyages series…unusual, engaging repertory complementing the main Haydn quartets” (Ken Herman, San Diego Story). 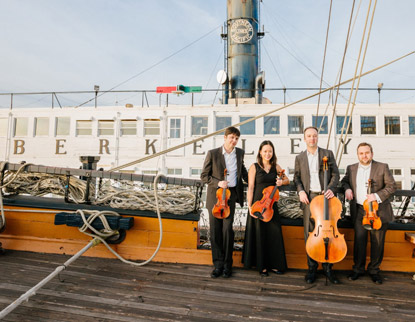 Maritime Museum of San Diego Director of Development Kelli Lewis highlighted the uniqueness of the experience, “Staged aboard the National Historic Landmark steam ferry Berkeley and surrounded by 500 years of seafaring history, the Hausmann Quartet concerts are a delight for the eyes and ears.”

The creative and adventurous mix of music presented in the series, combined with the idyllic views and sounds of the harbor make Haydn Voyages one of San Diego’s best-loved cultural institutions, now in its seventh season. In addition to the popular quarterly concerts aboard the Berkeley, the 2022 season will feature three pop-up shows: mini-concerts on January 30, April 3 and October 2, featuring the Hausmann Quartet performing in unique spaces around the Maritime Museum, free to museum guests. Details on the selections and settings will be announced as they approach, so stay connected to the social media accounts of both the quartet and museum!

The seventh season will take audiences on a series of wonderful journeys. The varied programs encompass a vast range of eras, places and vital topics, featuring treasured classics alongside some of today’s freshest, most creative voices from around the world. Enjoy world-class performances from San Diego’s only floating concert hall!

“The Hausmann Quartet is one of a handful of string quartets…that move with fluent ease from Classical-period works (Haydn is one of their specialties) to contemporary works by living composers.” -San Diego Union-Tribune

“As Hausmann has amply demonstrated in its long-running project to play all of the Haydn string quartets at the San Diego Maritime Museum, these musicians matched enviable technical prowess with ardent conviction.” – San Diego Story

Four compositional giants meet on this concert program: Haydn, Beethoven, John Cage and Caroline Shaw. The dialogue among them is sometimes direct, and at other times less obvious, but Caroline Shaw sums it up best in her program note to her 2016 work, Blueprint:

“Chamber music is ultimately about conversation without words. We talk to each other with our dynamics and articulations, and we try to give voice to the composers whose music has inspired us to gather in the same room and play music. Blueprint is also a conversation — with Beethoven, with Haydn (his teacher and the “father” of the string quartet), and with the joys and malinconia of his Op. 18 No. 6.”

A world premiere quintet by Jessica Meyer (commissioned for the Hausmann Quartet and featuring the composer performing on viola) is the centerpiece of this program, which explores our relationship to the natural world and the alarming changes it is undergoing. George Walker’s tender, evocative Lyric and Haydn’s sunny opus 20/2 quartet are matched with Peter Schulthorpe’s hauntingly beautiful Quartet #18, his “heartfelt expression of my concern about climate change, about the future of our fragile planet.”

All concerts are Sundays at 2:30, and include an intermission for a total length of under two hours. Each creative program will also include informative and entertaining commentary between selections from noted UC Santa Barbara musicologist Derek Katz. Masks will be required for all performers and audience members until further notice.

Tickets available online, and at the door.
Click Here for Tickets

About the Hausmann Quartet
The Hausmann Quartet has established itself as an integral part of the cultural life of Southern California since its arrival in San Diego in 2010. As the Fisch/Axelrod Quartet-in-Residence at San Diego State University they teach and organize the chamber music program, engage in interdisciplinary collaborations with other departments and visit local schools for concerts and clinics on behalf of the School of Music and Dance. They pioneered interactive programs for students, adult amateur musicians and local seniors, veterans and homeless with support from Mainly Mozart, Irvine Foundation, National Endowment for the Arts and ACMP, and continue to administer and direct these programs as their own non-profit organization serving the Greater San Diego area, with recent grants from the California Arts Council and County of San Diego. Current community engagement partnerships with organizations including Art of Elan, Resounding Joy, San Diego Rescue Mission and Veterans’ Village of San Diego deepen the quartet’s local impact.

Founded in the summer of 2004 at Lyricafest, they have recently been hailed as “Excellent” by the San Diego Union-Tribune, which also cited “Their outstanding virtue is a rare one: the ability to disappear into and behind whatever they are playing, leaving only the music in view.” They maintain an active performance schedule throughout North America and Asia. The members of the Hausmann Quartet are violinists Isaac

Allen and Bram Goldstein, violist Angela Choong and cellist Alex Greenbaum. The quartet is named after Robert Hausmann, the eminent 19th-century German cellist and founding member of the Joachim Quartet.

About musicologist Derek Katz
Derek Katz is an Associate Professor of Music History at the University of California, Santa Barbara, where he received his PhD. He also holds a degree from Harvard, and has studied at The Free University of Berlin on a Fulbright Fellowship. A specialist in Czech music, he has published articles in Musical Quarterly and multiple Czech journals, as well as chapters in Nineteenth Century Chamber Music (Schirmer, 1998), and in Janáček and His World (Princeton, 2003). Katz has also written for The New York Times and the San Francisco Opera and spoken at Lincoln Center and Carnegie Hall. He is an enthusiastic amateur violist and chamber music player