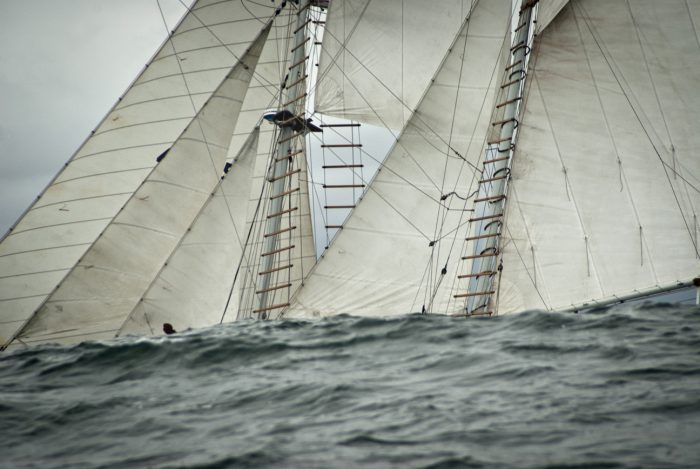 Maritime Museum of San Diego is proud to introduce this rare new photographic collection of historic, classic, and wooden yachts racing and sailing in San Diego. The exhibit includes an impressive body of work to amaze and inspire visitors about sailing and San Diego Bay from America’s Cup to historic Museum vessels to traditional wooden boats sailed for recreation on the waterfront. In the new Maritime Museum of San Diego exhibit Wind & Water: Sailing in San Diego, Bobby Grieser’s images are paired with photographs from his close sailing and photography friend Mark Albertazzi.

This is a passionate example for both sailing and photography fostered by a deep friendship with two of the industry’s most renowned nautical photographers. 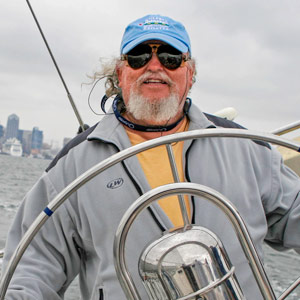 Bobby Grieser is well known in yachting circles as one of the elite nautical photographers. Although short in stature, “Bobby G”—as he was known to friends— had a huge presence, one that he was known to announce with his trademark bark, a literal “Woof, Woof!” that could be heard across anchorages.

Born in Washington, D.C., Bobby’s time growing up on the waters of the Chesapeake Bay nurtured his growing passion for all things nautical. He was a photojournalist at the Associated Press, Indianapolis Star, Washington Star, and the Los Angeles Times. His assignments took him around the world covering everything from riots to war zones in Somalia, the Reagan White House years, major sporting and historic events, and iconic personalities that ranged from Bob Dylan to Andy Warhol.

Bobby’s free time was spent covering his favorite Chesapeake Bay area subjects. His photojournalist background brought a unique quality to his photos which captured not only the beauty of sailing, but the hearts and souls of the people he encountered. In 1990, he published Chesapeake Bay, an art book featuring his black-and-white photography. An exhibition entitled Capturing the Spirit of the Chesapeake Bay, drawn in part from the photographs in his book, toured museums from St. Michaels to San Diego in the following years

His move to San Diego for the Los Angeles Times also coincided with the America’s Cup there, and Grieser would focus much of his sailing photography on the Cup. In 1998 Bobby left the paper to pursue his passion of sailing and photographed yacht racing events and sailing in waters around the globe including the America’s Cup, Louis Vuitton Cup, Heineken Regatta, and St. Bart’s Bucket Bash. Bobby was also a partner with Paul Todd in the nautical stock photo agency Outside Images.

Grieser passed away Janaury 31, 2017 in San Diego, California at the age of 70. A flotilla of friends from Bobby’s youth, media and sailing communities attended a celebration of life ceremony and spreading of ashes from aboard the schooner America in San Diego as well as on his beloved Chesapeake Bay. 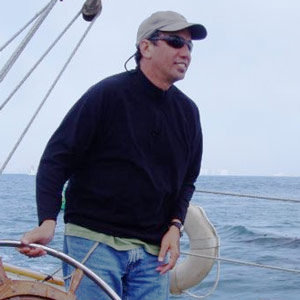 With family roots deeply entrenched on the Hawaiian island of Molokai, Mark Albertazzi’s entire life has been spent on or near the water. An avid waterman with a passion for photography, Mark has been making images of ocean scenes since his parents bought him his first 35mm camera at the age of 13.

Mark currently lives in San Diego, and is an active crewmember aboard classic yachts and competitive sailboats. His years of sailing aboard the 1930 John Alden schooner Dauntless has provided Mark unique access to regattas, classic yachts, and remote anchorages along the California coast. Mark is as comfortable at the helm of a 70-foot schooner in big following seas as he is paddling out at a remote surf break or going aloft to capture an image. 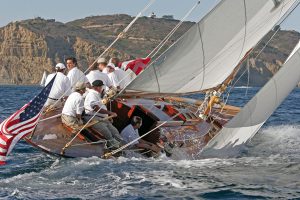 For over 30 years Mark has been an advertising agency principle and creative director, crafting advertising campaigns for international brands that include; Callaway Golf, Reebok, Sony and BMW. He has collaborated with some of the industry’s top commercial photographers and directors. Mark’s passion for both sailing and photography fostered a deep friendship with renowned nautical photographer Bobby Grieser.

Heavily influenced by maritime scenes painted by artist like Edward Hopper and James Edward Buttersworth, Albertazzi’s images have a painterly quality to them. Mark’s keen eye and waterman knowledge are revealed in his ability to capture critical moments of crew work, boat angles and sailing conditions. The strong graphic nature of his images is a nod to his graphic design background. Mark covers major West Coast regattas and cruising grounds for sailing publications as well as photography for nautical brands and stock photography agencies.

In the new Maritime Museum of San Diego exhibit Wind & Water, Albertazzi’s images are paired with a selection of photographs from Bobby Grieser. The exhibit features scenes of classic yachts and historic sailboats captured on the waters of San Diego