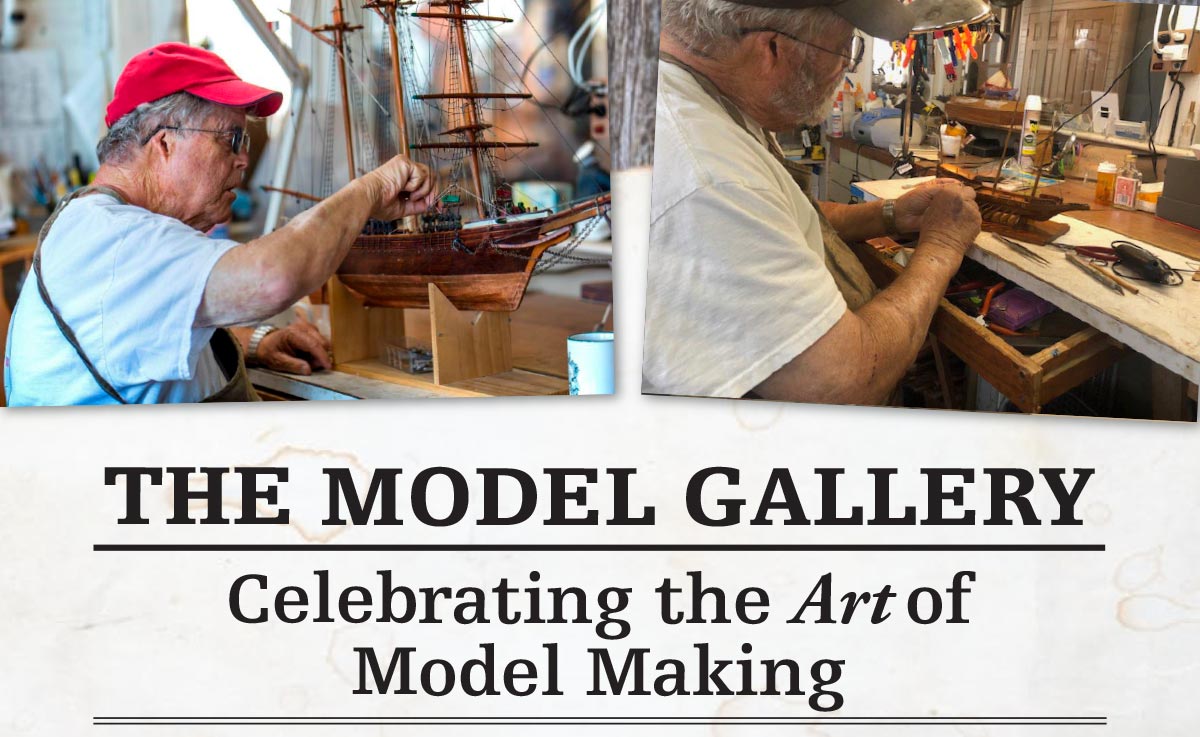 Model Gallery exhibit is located in a newly created visitor annex on the aft-end of the 1898 Victorian-era steam ferryboat Berkeley. 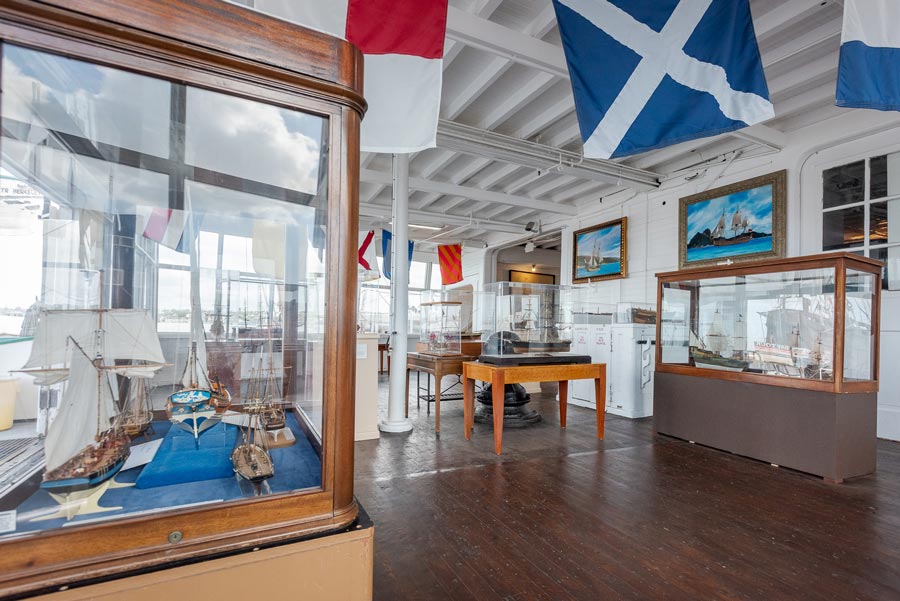 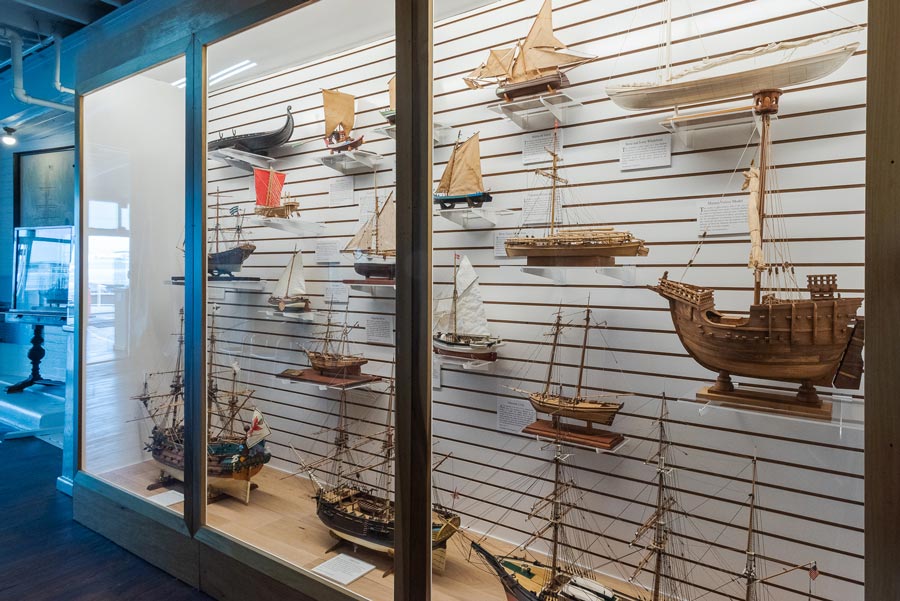 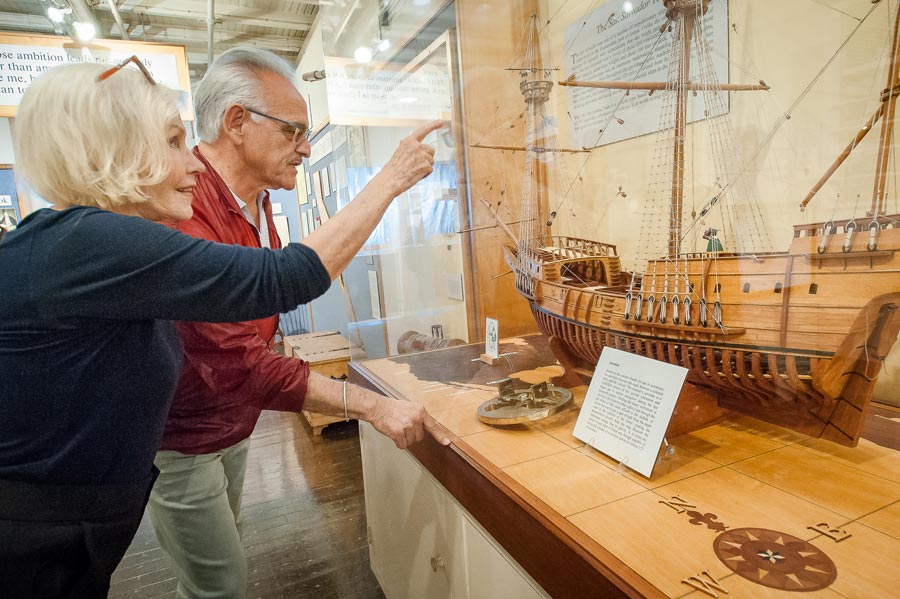 The Maritime Museum of San Diego’s new Model Gallery was made possible by the support of Jennie and Michael Hite and a fleet of generous donors and volunteers.

The new Model Gallery exhibit employs models as examples of fine art and as engaging illustrations of our common seafaring heritage.

For decades, the Maritime Museum of San Diego has presented models as examples of superb craftsmanship, constructed with thorough research and painstaking attention to detail by some of the local legends in model making, such as former collections manager Bob Crawford, and former ship’s carpenter, Joe Bompensiero.

Individual models on display have been drawn not only from the Museum’s collections storage, but also from very recent donations. Kevin Sheehan, Ph.D., Manager of Collections / Librarian/ Editor, Mains’l Haul for Maritime Museum of San Diego adds, “The most important of these is undoubtedly the work of Dr. William Brown, whose monumental corpus of work was featured in the 2016 edition of Mains’l Haul – A Model-Maker & His Art. Many of Bill’s works have been featured in temporary and permanent exhibits here at the museum over past decades. Now they are here on permanent display, donated from his Estate.

Another significant donation of larger models was received in early 2020 from the Beyster Family Foundation. These include the beautifully cased impressive representations of Clipper ships such as the Sovereign of the Seas. A third significant donation now featured in the gallery and adjacent hallway is that of Dr. Charles Stern, once a member of the San Diego Ship Modeller’s Guild. His works includes an elegant Polacca-rigged Xebec and a fine model of Columbus’s Santa Maria.

Along with models that rank as pieces of fine art are other artifacts from the Maritime Museum of San Diego’s collection – the now retired fore-topsail of the Californian, and test-tank hull models from Campbell’s Shipyard. The strategic positioning of the model of the Californian next to the suspended topsail allows the viewer to marvel at the size of one of the more modest sails of the museum’s ships. A 1930’s photo of the Star of India and the USS Constitution moored together in San Diego juxtaposed to a model of the Constitution, like the Californian model and topsail, provide further context for the models being exhibited. 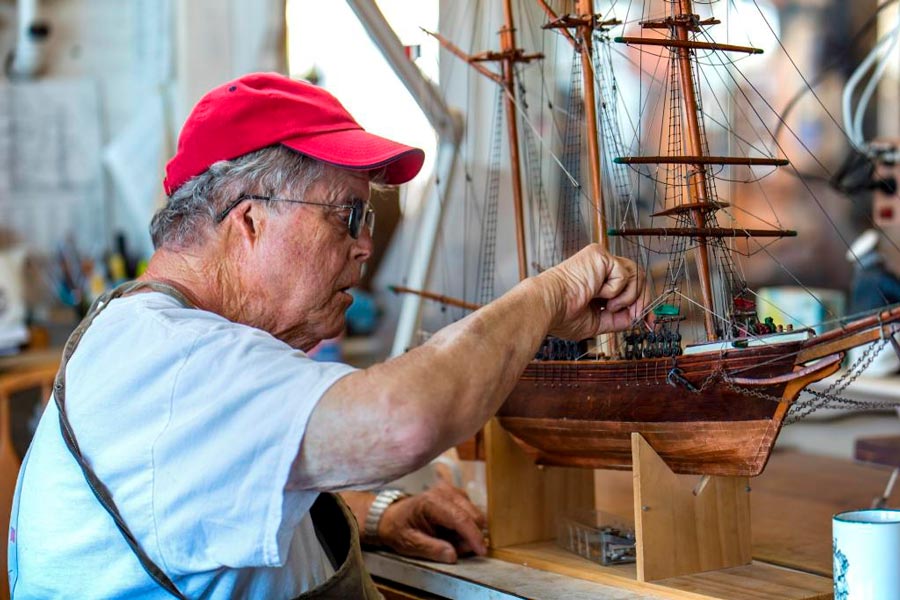 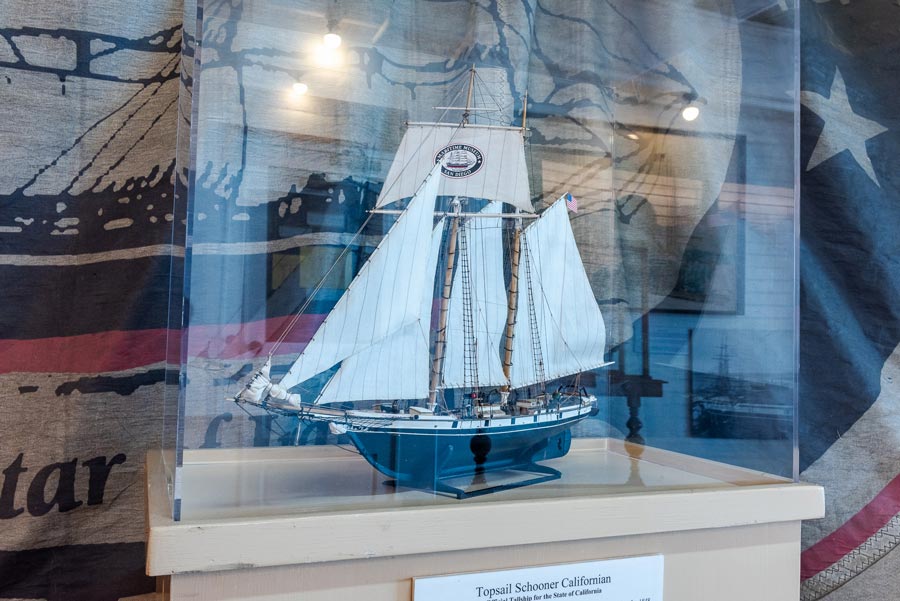 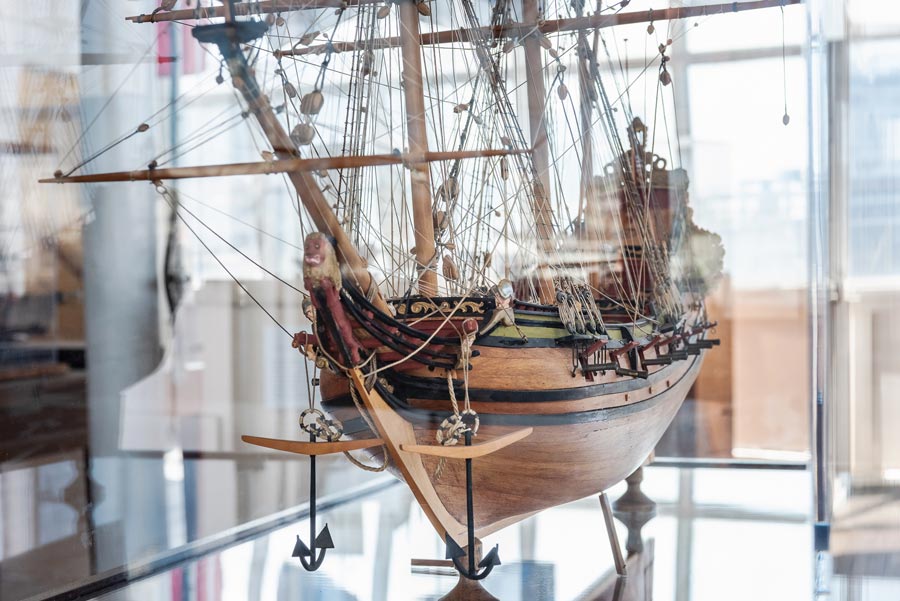 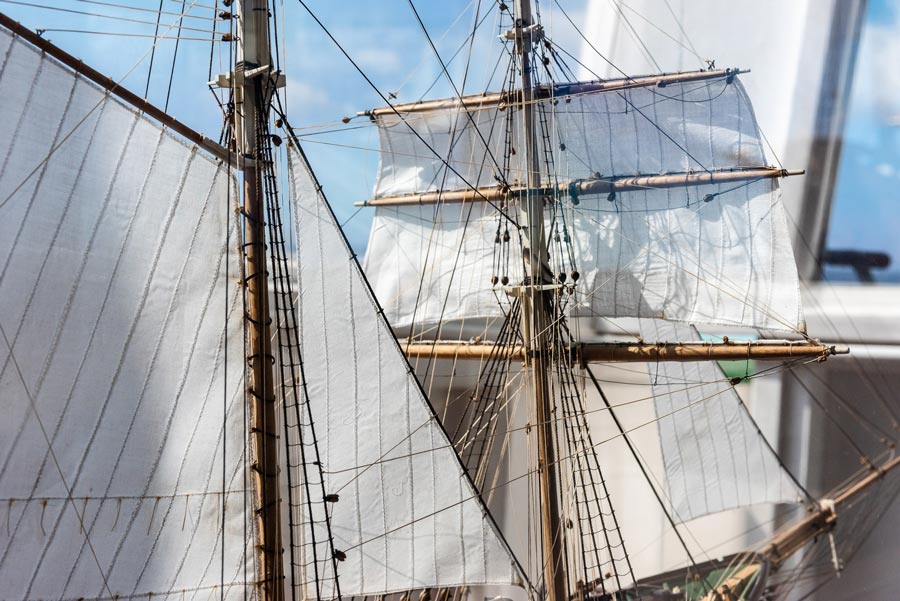 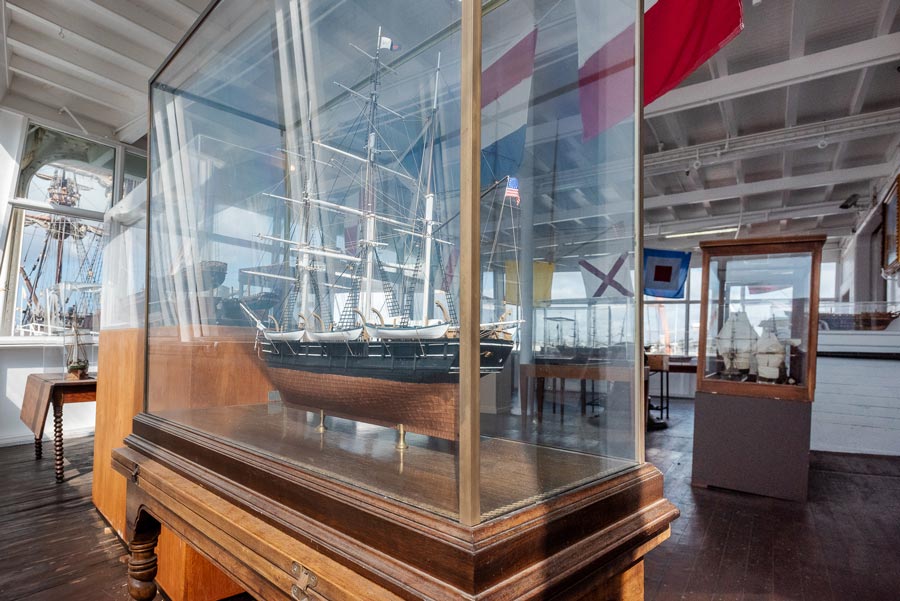 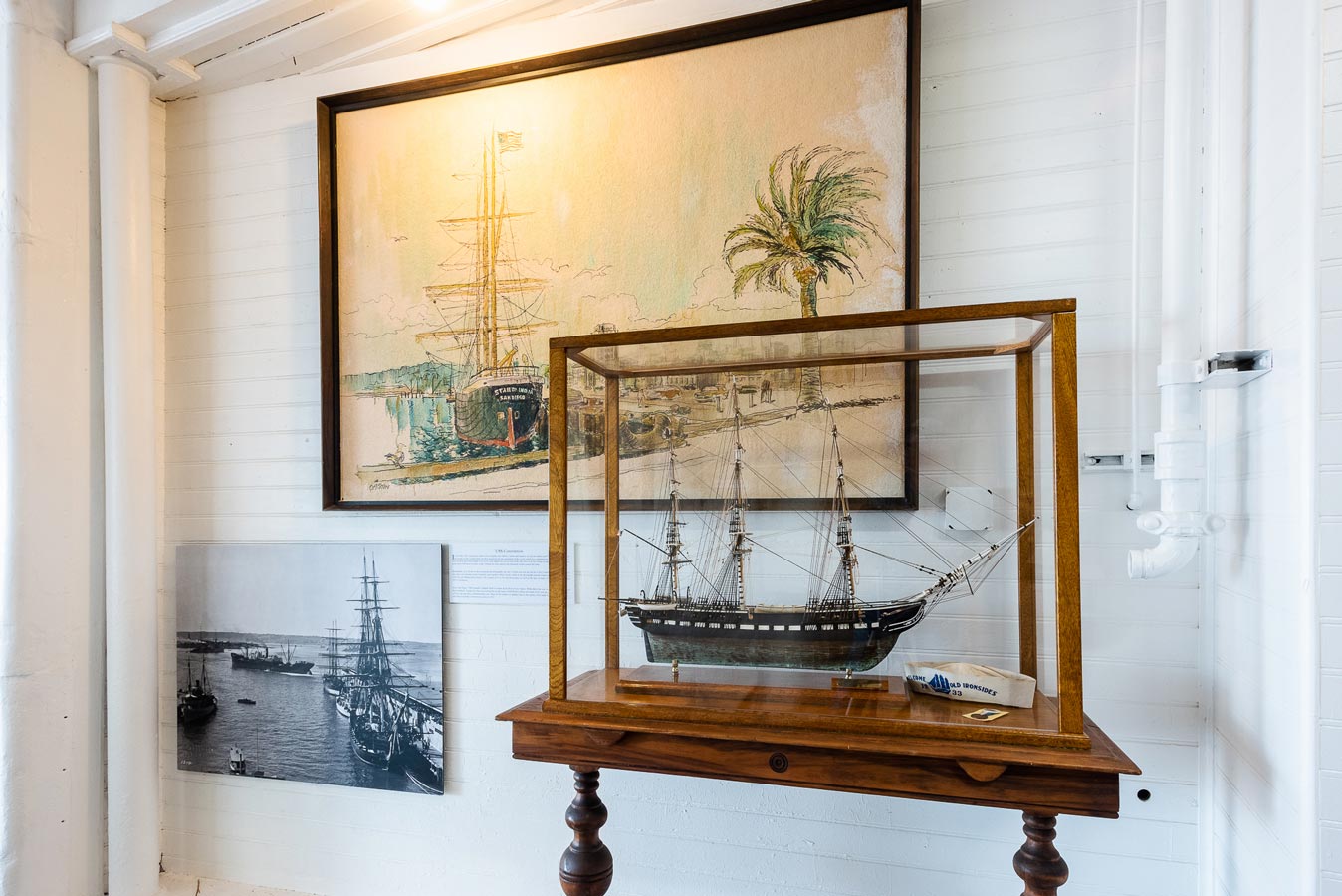