Thanks to generous contributions from people like you and additionally backed by city, county, and private foundations, we were able to realize all $200,000 of the matching funds available from the National Maritime Heritage Grant Program and have raised the money needed to complete this project.

Scaffolding installed in June 2018 on the outboard half of the southwest side allowed crews to work safely and protect the water from contamination, but has hidden their progress from the casual observer; now this section is nearly completed.

David “Swanny” Swanson provides an update from the maintenance crew:
“All of the windows behind the scaffold area have been either reconditioned or replaced. Specifically, the wood has been stripped, repainted, and re-varnished. Many now have new glass and are finally keeping exhibits and office spaces dry. The last painting process is now underway. Recent winter rains have tested this new weather proofing and we are happy to report that inside it remained warm and dry.”

Repairs to the embarcadero gang way have been much more apparent to visitors. On one side decking has been removed, framing repaired and new decking laid down; the other section is now under repair. Thank you to all who have braved walking through the construction zone.

With the end of the year quickly approaching, the maintenance crew has set the foreseeable goal to complete painting and finish re-decking the gangway. By January, 2019, the beautiful new siding will be revealed, then Swanny and the maintenance crew will start the process all over again on the forward quarter.

To learn more about her upcoming repairs, Click Here.

Restoration to the windows and frames.

Thanks to the loving and generous support of the Maritime Community and members like you, we have nearly matched the National Maritime Heritage Grant Program!

Restoration is progressing on Berkeley’s infrastructure. In order for Berkeley to still function as the center of the Museum exhibits and administrative offices, maintenance crews are doing one section at a time rather than the entire superstructure all at once. In January, they started on the lower outboard quarter. The first few months were primarily about removing all the windows and siding from the windward section, starting on refurbishing the windows and replacing rotting frames. In the aft shop area, most of the lower wall had to be completely removed and rebuilt. Much of the cap rail was damaged so a new portion was scarfed in and the remainder was epoxied to better preserve the wood. In the last month, new siding, specially treated to be long lasting, has been placed along the lower windows under the new rail. Each lower window received a new sash and refurbished windows are being carefully reinstalled. As the crew completes this first section and begins the next, windows along the upper outboard corner are being removed and are headed to the shop for repair and repainting. 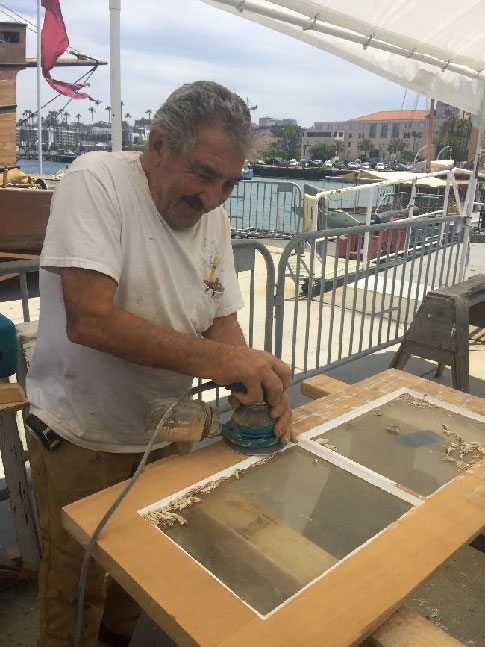 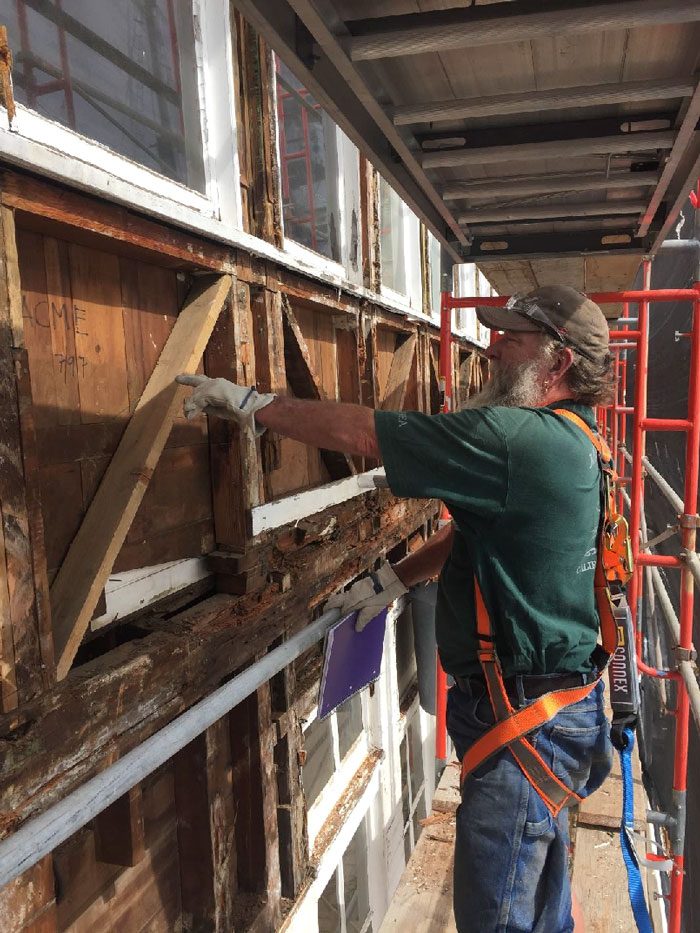 David Swanson finds evidence of the last work crew after removing siding and beginning to work on removing dry rot. 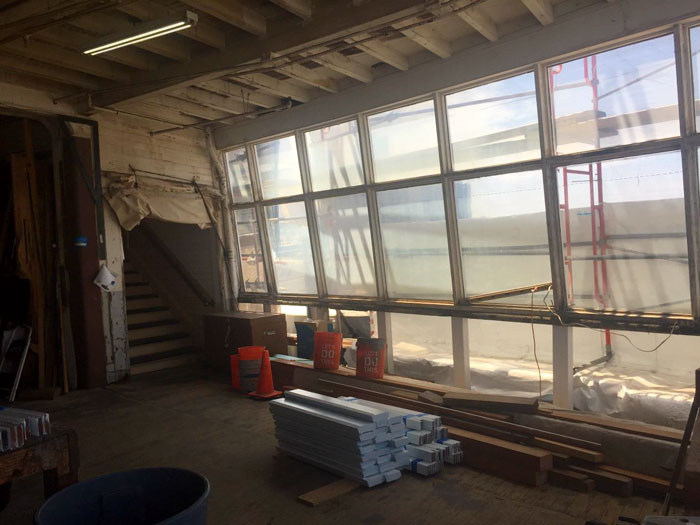 The lower back wall had to be removed and will be rebuilt. 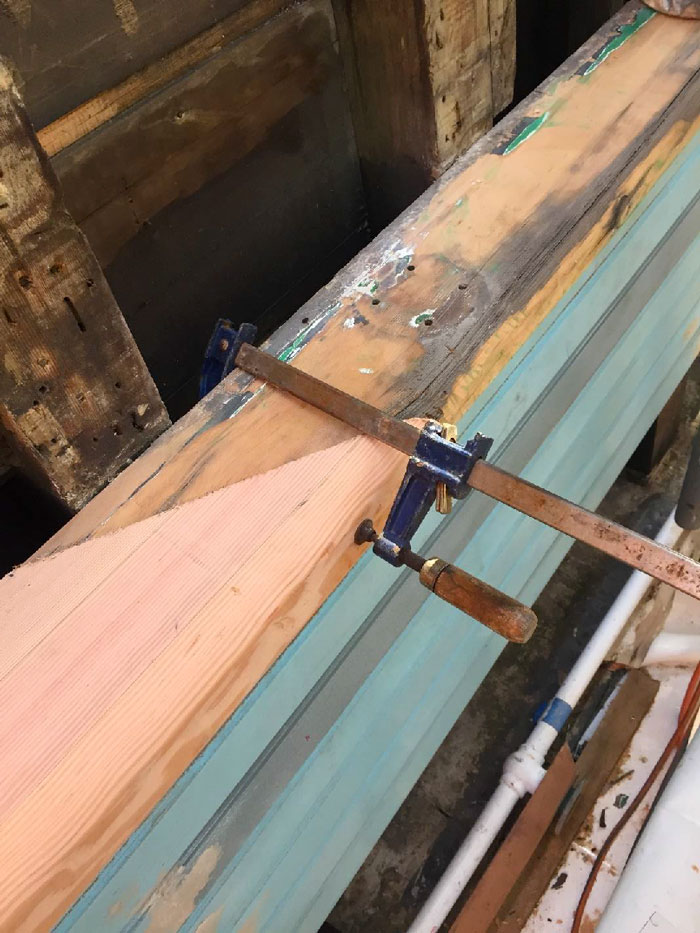 New caprail is scarfed into the existing rail and the new blue epoxied siding below waits for a coat of fresh paint. 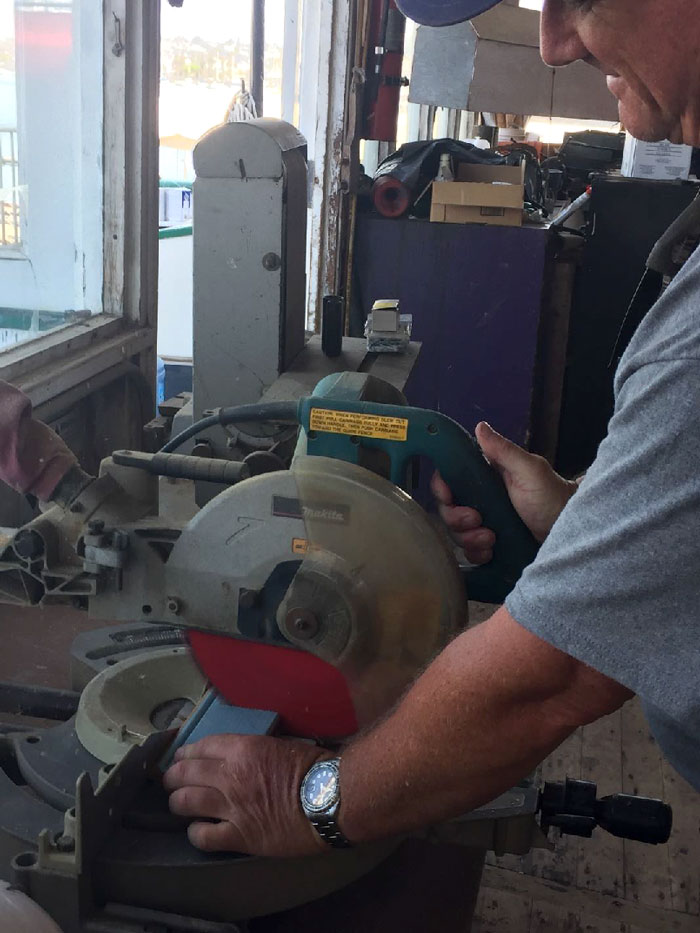 Restored by staff at the Maritime Museum of San Diego, the Berkeley became one of the cornerstones of the museum, providing much needed exhibit space, and also providing San Diego with a superb venue for waterfront entertainment.

San Diego, California, August 7, 2017 ‐ The Maritime Museum of San Diego, home to one of the world’s finest collections of historic vessels, including the world’s oldest active sailing vessel Star of India, has been awarded $200,000 in preservation project funding from the National Maritime Heritage Grant Program to preserve the 1898 steam ferry Berkeley. The grant program funds Maritime Heritage Education and Preservation Projects throughout the United States. Funding for Maritime Heritage Grants require 1-to-1 match with non-Federal assets from non-Federal Sources.

The 1898 ferry Berkeley’s entire superstructure is essentially a massive and ornate wooden building, not all that different from the showpiece Queen Anne Victorian buildings which grace the historic districts of many American cities. Over the more than thirty years that the ship has been moored in her present location, the south side of the superstructure has been exposed to the cumulative effects of direct sunlight and weather, especially the southerly winds and rain typical of our winter storms. National Maritime Heritage matching grant funds provide the means to use to create a watertight, weatherproof, and much more durable structure for the Berkeley starboard side. 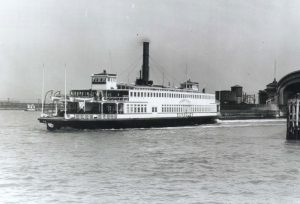 Berkeley Historic-As She appeared in the early twentieth century. 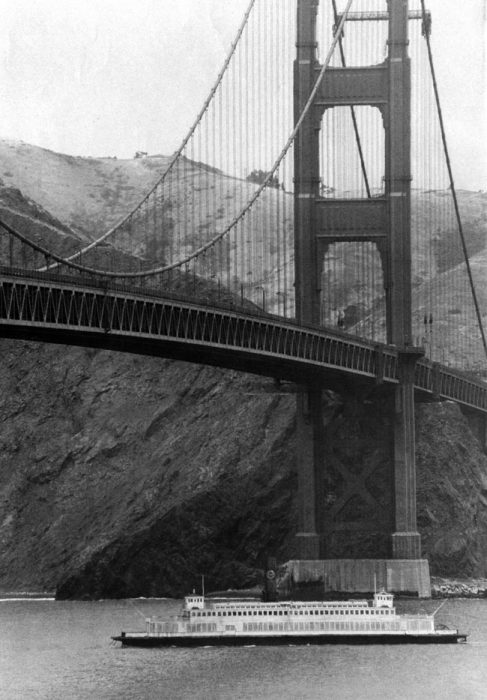 Steam ferry Berkeley, one of the fewest of its type still in existence, represents the transition to steam-powered propulsion, with its triple-expansion engine. Berkeley provided service between Oakland and San Francisco for nearly 60 years, including her role in evacuating thousands of San Francisco residents at the time of the great earthquake in 1906. The ship is both a State and National Historic Landmark, and received the Steamship Historical Society’s “Steamship of the Year” award in 2015.

Dr. Ray Ashley, CEO/President of the Maritime Museum of San Diego exclaimed, “News of this latest National Maritime Heritage Grant is such an honor. This reflects how with devoted leadership, staff, volunteers and our community, we have for years united on a commitment to deliver a cultural and educational experience like no other, and together deliver on our mission to serve as the community memory of our seafaring experience by collecting, preserving, and presenting our rich maritime heritage and historic connections with the Pacific world.”

Berkeley received a prestigious Save America’s Treasures preservation award in 2001, which funded what was then a revolutionary preservation technique adapted from the offshore oil industry to coat the entire exposed outer surface of Berkeley’s hull with a ceramic/epoxy composite to eliminate further corrosion. Fifteen years out, the Museum confirms this groundbreaking process proved successful, and subsequently has been used on other metal-hulled historic vessels in the Museum’s fleet and throughout the United States.

Over the last three years, in consultation with naval architects and experts in the preservation of historic vessels, the Maritime Museum of San Diego used National Maritime Heritage Grant resources to undertake a major project to replace all the weather decks on Star of India to ensure that she will be preserved for future generations. Today when visitors view these gleaming decks, they must look much as they did on the day of her launching in 1863.

The iron hull of Star of India has virtually remained unchanged since she was launched as Euterpe in 1863. Wooden decks, however, have a shorter lifespan. The deck planks on the Star of India have been replaced several times during her career as a merchant vessel, emigrant ship, lumber carrier, and now a living museum. Haul Curators and shipwrights at the Maritime Museum of San Diego employed a new and revolutionary procedure for this re-decking process requiring the execution of a series of carefully planned steps.

On June 21, the Maritime Museum of San Diego hosted a special reception to celebrate completion of the complex restoration project for hundreds of project donors, members, staff, and volunteers.

Maritime Museum of San Diego has been the recipient of three National Maritime Heritage Program grants in recent years.