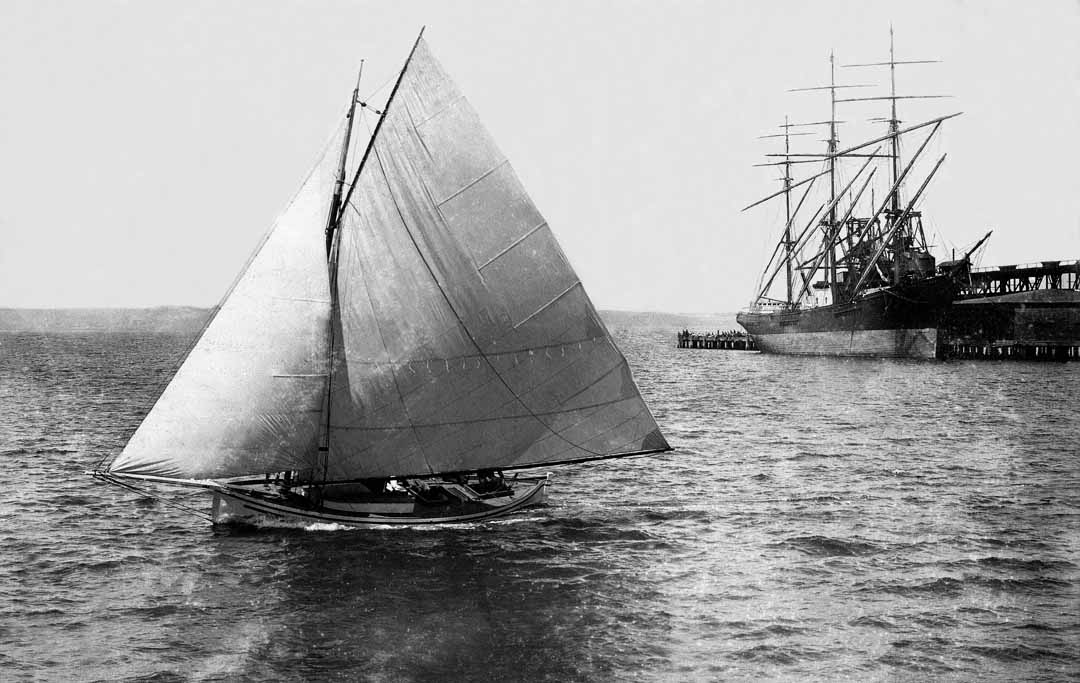 SAN DIEGO, CA – The Maritime Museum of San Diego, the 501c3 non-profit museum that enjoys an international reputation for excellence in restoring, maintaining, and operating historic vessels including the world’s oldest active sailing ship, Star of India has completed restoration of the 1902 Butcher Boy sailboat. Butcher Boy was commissioned in 1902 to be the fastest boat on the water, because she needed to be. Built to deliver fresh provisions to the large vessels that could not enter San Diego Bay, she would not be economical unless she could make fast runs to weather from the downtown waterfront to the Coronado Rhodes. From her modest beginning, Butcher Boy was destined to become a distinguished San Diego legend, both as the region’s oldest workboat and oldest yacht – the symbolic ancestor of almost all the boats now seen at any time on San Diego Bay.

The Butcher Boy restoration project was organized to return the boat to her original sailing condition and undertaken as a public exhibition and educational project at the Maritime Museum of San Diego’s former San Salvador build site at Spanish landing.

According to Raymond Ashley, Ph.D., K.C.I., President/CEO of the Maritime Museum of San Diego, “Butcher Boy will re-emerge onto San Diego Bay, as beautiful and spirited as the day she was launched nearly 100 years ago, ready to provision with a bit of the past and carry mariners back to our roots. Butcher Boy, originally commissioned in 1902, and first built as a workboat and a yacht, is the oldest locally built example of either.” The Butcher Boy restoration project was made possible by generous donations and support from the Ellen Browning Scripps Foundation, Lynne J. Eddy, Bob and Marion Wilson, John and Nancy Todd, Russell Thomas and the Ancient Mariner Sailing Society.

Volunteer Steve Kessler performed the first task of carefully taking her lines and lofting them so that they could be recreated with new materials. In June 2019, the crew of carpenters began the careful task of disassembling her one board at a time. Slowly and carefully, the restoration crew reframed her, keeping the original keel, but having to recreate nearly everything else, from bow to stern.

By March of 2019 the work crew was ready to lay hull planks and brought in shipwright Vince Sardina to assist. The last, “whiskey” plank was laid with a small celebration in September and the crew began work on the deck house, painting, and fiber glassing. By the beginning of 2020, riggers joined the group to install spars, hardware, lines and canvas while the finishing paint, varnish and waterproofing was completed. Unfortunately, Covid-19 closures required that Butcher Boy’s April 2020 relaunching to be postponed for nearly two years. Kept trailered and undercover, she is now ready to get back out on the water.

Visitors interested in learning more about the Maritime Museum of San Diego’s restoration projects, self-guided and docent historian guided tours, or fascinating experiences such as the daily historic bay cruises aboard the restored 1914 Pilot and weekend naval history bay tours aboard the restored PCF 816 Swift boat, or the tall ship sailing experiences aboard the schooner Californian or 16th century galleon replica San Salvador can visit sdmaritime.org or the Museum Ticket booth open daily 10:00 a.m. to 4:00 p.m.