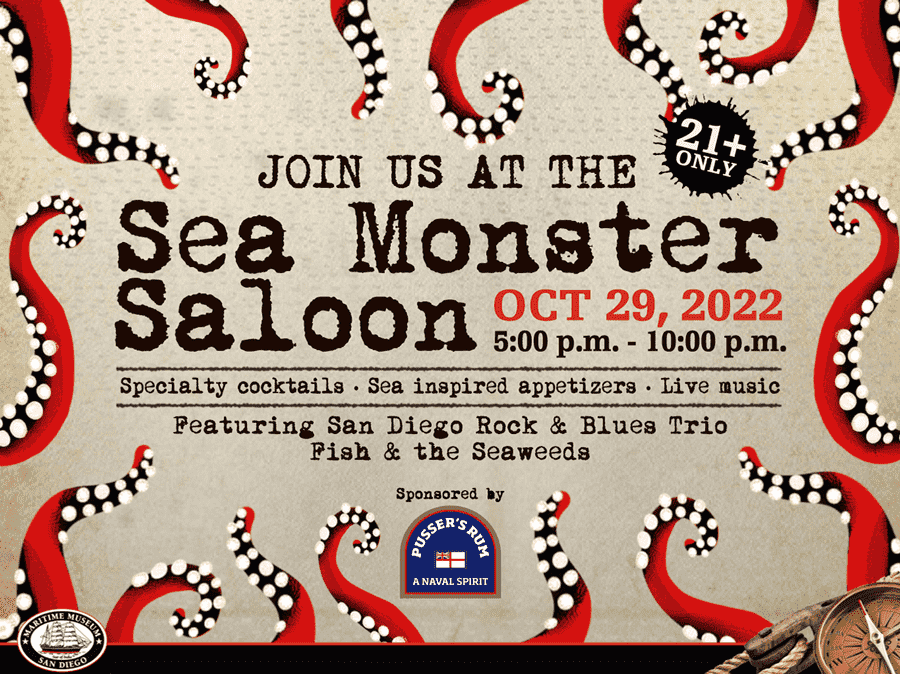 Sold Out Event Repeated on Star of India along the Waterfront

SAN DIEGO, CA – Maritime Museum of San Diego, serving as the community memory of our seafaring experience by collecting, preserving, and presenting our rich maritime heritage and historic connections with the Pacific world, hosts a second Sea Monster Saloon in conjunction with the opening of their new popular exhibit. Exhibit Curator Susan Sirota, Vice President of the Maritime Museum of San Diego, explains, “We were thrilled with the visitors’ response to the new exhibit, Sea Monsters: Delving into the Deep Myth and Sea Monster Saloon 21+ private event hosted during the recent Comic-Con Convention. Many participants showed up in costume and we encourage our Halloween weekend guests to dress up in costume to continue the fun.”

The Maritime Museum of San Diego’s new summertime educational, entertaining and interactive Sea Monsters: Delving into the Deep Myth exhibit is a fresh, fun, eye-catching experience, complete with dramatic Kraken-inspired tentacles climbing across the yards and rigging of the legendary Star of India. Visitors will be taken on an imaginary journey at the end of the 19th Century, when a fictional Professor of Natural History is tasked with investigating the existence of Sea Monsters in various parts of the globe. To learn more about the exhibit, CLICK HERE.

Advanced tickets are $50.00 per person, members $40.00
At the door $60.00
A no-host bar will also be available
Advance reservations recommended
This is a 21 and over event
Capacity is limited