Wish You Were Here

Maritime Museum of San Diego, serving as the community memory of our seafaring experience by collecting, preserving, and presenting our rich maritime heritage and historic connections with the Pacific world, announces the opening of Wish You Were Here, a new exhibit featuring an array of vintage postcards and photography from around the globe. Opening this November at the Maritime Museum of San Diego Compass and Gould Eddy Galleries aboard the national historic landmark, the 1898 steam ferryboat Berkeley, Wish You Were Here invites visitors to become immersed in an amazing array of vintage color-tinted San Diego postcards. From landmark events to world-class attractions, guests will see why the region has for more than 100 years earned a reputation as one of the world’s most popular spots for travel and adventure. Visitors to the exhibit will also receive a commemorative postcard to send to friends and family.

Raymond Ashley, Ph.D., K.C.I., President/CEO of the Maritime Museum of San Diego, explains the experience as “an opportunity for locals and visitors alike to stroll down memory lane as the Museum unveils a collection of scenic San Diego backdrops that stun and inspire pride and return visits to America’s Finest City.” Wish You Were Here includes an eclectic vintage postcard portfolio of the old Santa Fe Depot, Tent City, the ferryboat and ferry landings, downtown San Diego, the glistening beaches and the crazy caves, the Cabrillo Lighthouse, Harvard & Yale Coastliners, horseracing hotspots, high society yachting and generations of racing. Up and down the coast visitors will go, from San Diego to Long Beach to Redondo, San Pedro and Catalina Island. Flashbacks include the historical days at the Balboa Park Exposition, Charles Lindbergh’s visit, WWI Naval fleet and stations, the Spreckles yacht sailing San Diego Bay and our rich history in development of aviation and airports.

For adventurous types, the Maritime Museum of San Diego’s Wish You Were Here exhibit also taps into the jet-setter deep within. Stepping outside of the SoCal known, visitors will wander through a brilliant collection of black and white international Ports of Call photography featuring contributions from Southern Californian history buff Nancy K. Dubois. Ms. Nancy K. DuBois of Beverly Hills, has a passion for sailing and historical photographs. Over many years she has been an avid photo collector of sea port images from around the world, and recently donated her collection to the Maritime Museum of San Diego.

Maritime Museum’s Librarian, Curator and Collections Manager Kevin Sheehan, Ph.D. adds, “Our dedicated exhibit designer Maggie Walton has also created a new, fun, interactive element within the exhibit. Visitors can design their very own vintage postcard to snail mail to friends and family and before departure snap their very own Wish You Were Here selfies to instantly share on social media from any one of the Maritime Museum’s historic vessels overlooking San Diego Bay. 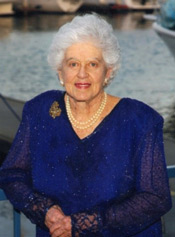 Nancy and her late husband, Edmund, began collecting photography in the early 1970s. He had been an amateur photographer and had attended several workshops with Ansel Adams. Some of their early purchases were of Adams’ work. The collection is focused on black-and-white photography and contains works from the mid-nineteenth century through the present day. Nancy and Edmund also started buying books written by or about the photographers in their collection. This led to amassing a large collection of photographically illustrated books by both known and unknown artists. After Edmund’s death in 1985, Nancy continued growing both her library and her photographic collection.

Nancy has been involved with both the Los Angeles County Museum of Art (LACMA) Photographic Arts Council and Museum of Photographic Arts (MOPA). Nancy is an Honorary Trustee at MOPA, having established the Edmund L. and Nancy K. Dubois Library there. In recent years, she has been collecting nautical photographs, which corresponds with her love of sailing.

Visits to all exhibits found aboard the Museum’s historic fleet are included with one general admission ticket purchase. Visitors can purchase tickets to the Maritime Museum of San Diego online or visit the ticket booth and Gift Shop located at 1492 North Harbor Drive, San Diego, CA 92101-3309. For more information, call 619.234.9153.