San Diego, CA (August 21, 2019) — Maritime Museum of San Diego announces a new fundraising partnership with Bodhi Tree Concerts. As with concerts past, all proceeds benefit local charities. To date, Bodhi Tree (based out of St. James by-the-Sea Episcopal Church in La Jolla) has presented more than 30 concerts and donated more than $25,000 to charitable causes. 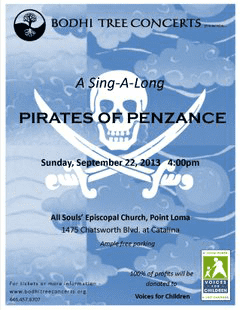 Bodhi Tree concerts will present their annual sing-along tradition with Gilbert & Sullivan’s The Pirates Of Penzance on Sunday, September 22, 2019 at 4:00 p.m. at All Souls Church in Point Loma located at 1475 Catalina Blvd., San Diego, CA 92106. 100% of the profits will be donated to the Maritime Museum of San Diego, who has a worldwide reputation for excellence in restoring, maintaining and operating historic vessels, including the world’s oldest active ship, the Star of India.

The classic silly tale of mistaken identities, ‘noblemen who’ve gone wrong’ and the power of Queen Victoria to turn them right is not to be missed. Audiences can join Michael Sokol (Major General), Walter DuMelle (Pirate King), Humberto Borboa (Fredrick), Eden Tremayne (Mabel) and Kim Hendrix-Racine (Ruth), leading a cast of San Diego’s finest as they romp back to coastal Cornwall, England. Scores will be provided so all can sing along during the performance.

Adult ticket prices are $25.00 and student/military tickets are $15.00 each.
CLICK HERE for Tickets and more Information