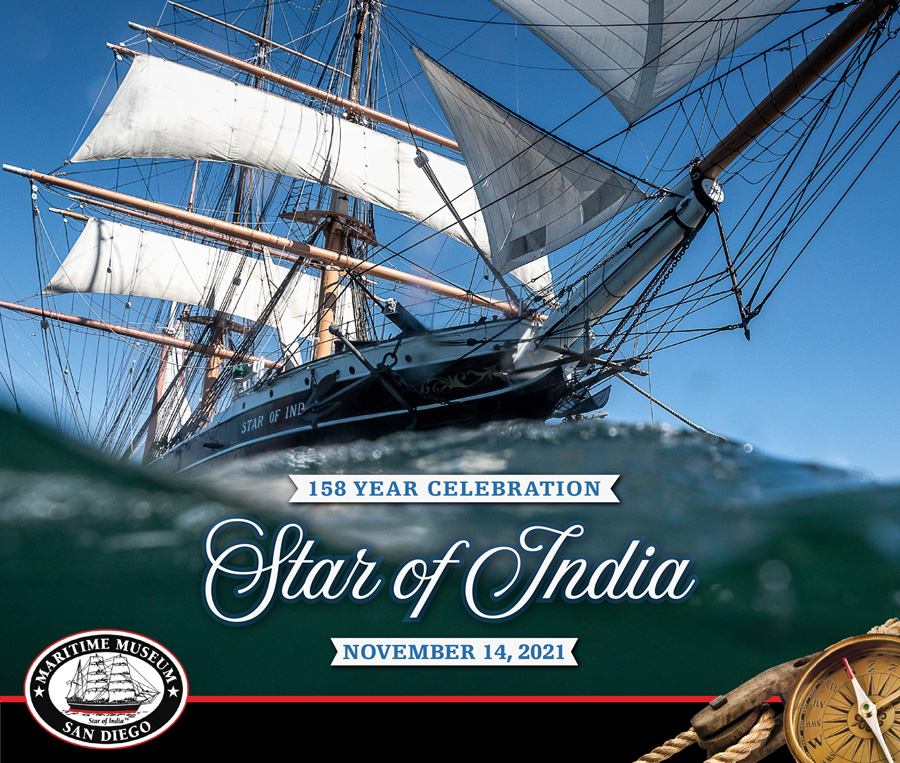 San Diego, CA – Maritime Museum of San Diego with an international reputation for excellence in restoring, maintaining, and operating historic vessels, including the world’s oldest active sailing ship, Star of India, invites Museum members, volunteers and public to celebrate the legendary vessel’s 158th birthday Sunday, November 14, 2021. Three years have elapsed since the last time Star of India sailed November 17 and 18, 2018. According to Maritime Museum of San Diego President/CEO Raymond Ashley, Ph.D., K.C.I. “The pandemic has unfortunately postponed preparations for the Star of India annual sail, and therefore we wanted to create this shore-based anniversary to appreciate our San Diego icon.”

The 501c3 non-profit Maritime Museum of San Diego relies on donations and the support of members, volunteers and visitors to sustain this waterfront collection of historic vessels and maritime exhibits. Maritime Museum of San Diego is ranked as one of the nation’s top attractions offering self-guided tours, docent-guided group tours, tall ship charters and historic bay cruises, public events, educational programs, and a distinctive venue for corporate/private events.

San Diegans and visitors to our region alike will have the chance to come aboard Star of India for waterfront celebration festivities free with purchase of general admission Sunday, November 14, 2021 from 10:00 a.m. to 3:00 p.m. Activities planned include Living History education staff and crew volunteer Star of India Age of Sail trim demonstrations, Docent meet and greet tours and witnessing the Star’s figurehead restoration project underway.

The Maritime Museum of San Diego is restoring the figurehead normally seen on the bow of Star of India. The figurehead represents Euterpe, one of the Muses from Greek mythology. Euterpe was the muse of music. Euterpe was the original name of the Star of India, when it was built in the Isle of Man in 1863. Her name was changed from Euterpe to Star of India in 1906 by the Alaskan Packers’ Association, which had purchased the ship in 1901. The figurehead has not been removed from Star for restoration by the Maritime Museum of San Diego for over 30 years. The last time she was removed from Star was 1988.

Cake and punch will also be served, while supplies last. The ensemble, Many Strings will perform 11:00 a.m. to 1:00 p.m. sharing their guitar, maritime percussion and vocal talent with visitors.

General admission tickets include entrance to all Maritime Museum of San Diego vessels and exhibits. Tickets are $20.00 for adults, $15.00 for senior/military/students (13-17) and $10.00 for 12 and under and may be purchased in advance online at sdmaritime.org or at the Maritime Museum of San Diego Ticket Booth located at Star of India Wharf, 1492 N. Harbor Drive (north embarcadero between Grape and Ash Street & next to Portside Pier), San Diego, CA 92101-3309. The Museum is open daily 10:00 a.m. to 5:00 p.m. Ticket booth/entrance closes 4:00 p.m.

ABOUT STAR OF INDIA
Star of India is the world’s oldest active sailing vessel. She is also the oldest iron-hulled merchant ship still afloat. She was launched as the fully-rigged ship Euterpe at Ramsey Shipyard on the Isle of Man in 1863.

Euterpe began her working life with two near-disastrous voyages to India. On her first trip she suffered a collision and a mutiny. On her second, a cyclone caught Euterpe in the Bay of Bengal, and with her topmasts cut away, she barely made port. Shortly afterward, her first captain died on board and was buried at sea. After such misfortunes, Euterpe would eventually make four more voyages to India as a cargo ship.

In 1871 she was purchased by the Shaw Savill line of London and for the next quarter century she transported hundreds of emigrants to New Zealand and Australia. During this period, she made twenty-one circumnavigations. It was rugged voyaging, with the little iron ship battling through terrific gales, “laboring and rolling in a most distressing manner,” according to her log.
With the opening of the Suez Canal, and sail giving way to steam power, Euterpe would eventually be sold to the Alaska Packers Association. In 1901 her new owners changed her rig to that of a bark (her present configuration). By the time of her retirement in 1923, she had made twenty-two voyages from San Francisco to Alaska, returning each year with her hold laden with canned salmon.

In 1926, Star of India was sold to the Zoological Society of San Diego as the projected centerpiece for an aquarium and museum. The Great Depression and World War II saw these proposals languish from lack of funding. Eventually in the late 1950s and early 1960s, thanks to a groundswell of support from local San Diegans, Star of India was restored to sailing condition. In 1976, she set sail once again. Her preservation continues as a living reminder of the great Age of Sail, thanks to the tireless efforts of curators and volunteers at the Maritime Museum of San Diego.