Star Of India
Scheduled For Once In A Decade Haul Out 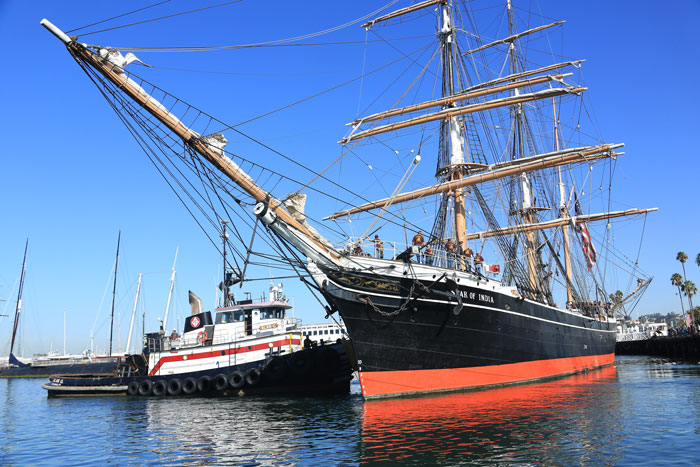 Star Of India Scheduled For Once In A Decade Haul Out and Restoration Project February 11 – 21, 2020

SAN DIEGO, CA —- Maritime Museum of San Diego, ranked as one of the nation’s top attractions offering self-guided tours, docent-guided group tours, tall ship charters, year-round public events, educational programs, and a distinctive venue for corporate/private events, announces Star of India will be dry docked for restoration for at least 10 days in February. The ship will be closed starting Tuesday, February 11, 2020 and removed from her San Diego waterfront location at the Maritime Museum of San Diego located at 1492 N. Harbor Drive for approximately 10 days.

Raymond Ashley, Ph.D., K.C.I., President/CEO of the Maritime Museum of San Diego states “Star of India, a ship that is arguably the oldest active sailing ship in the world, is a symbol of our city and region. In a given year, as many as two million people view her at her bayside location in downtown San Diego and thousands of school-age children participate in overnight Living History programs.” Data on visitors and school groups show Star of India attracts more visitors than any other ship in the Museum’s current collection. Revenues generated by the ships draw help to support preservation and maintenance of the Star along with other vessels.

Maritime Museum of San Diego has received an award of $200,000 from the National Park Service’s Maritime Heritage Program in support of the upcoming Star of India restoration project. However, this must be matched by community funds in order to receive the whole of that sum. Community support will help ensure that Star of India, an essential element of the world’s maritime heritage, an icon of the City of San Diego and region, and a key element in defining our sense of place, community, and regional history, will serve as an inspiration, an educational tool, and a source of wonder for hundreds of years to come.

Kelli Lewis, Maritime Museum of San Diego Director of Development, adds, “Museums are often collections of artifacts, but at the Maritime Museum of San Diego, the artifacts are the Museum. The Museum is a collection of vessels where visitors are transported into history as they walk on the decks and gaze into the rigging. History is taught not just through stories and text panels but through first hand-experience and lessons learned working on and sailing these ships. The challenge lies in extending the integrity of these vessels far beyond the time and safety standards they were designed for. Hence, restoration, preservation and general maintenance are inherent to the Maritime Museum’s mission to serve as the community memory of our maritime past.”

Beginning with restoring the nearly 100-year old Star of India in 1958 and continuing through today, the Museum works on a constant schedule to restore and replace degradation of organic materials aboard all its vessels so that they can meet requirements put in place by the USCG as passenger vessels or dockside attractions. Over the past 5 years the Museum has replaced the decks aboard Star of India, rebuilt the weathered side of the 1898 Victorian-era ferryboat Berkeley, completed boiler and hull work on the 1914 steam yacht Medea, hauled out and done restoration work on the Vietnam War era PCF 816 Swift boat, the 1914 San Diego Harbor Pilot, HMS Surprise, the C.W. Lawrence Revenue Cutter replica and official tall ship of the state, Californian, and 1542 Spanish galleon replica San Salvador, built by Maritime Museum staff, volunteers and community of donors. The 1905 San Diego Butcher Boy sailboat, famous for her early days in provisioning for commercial ships travelling in and out of the San Diego harbor, and once winner of the historic Lipton Cup, has also been rebuilt from the ground up by staff and volunteers at Spanish Landing and in 2020, Star of India will be hauled out and Surprise will have all new decks and be re-planked on the starboard side.

The Maritime Museum collection of vessels includes four national and state historic registered landmarks including Star of India, Berkeley, Pilot and Swift. Maritime Museum of San Diego has been the recipient of four National Maritime Heritage Program grants in recent years. To continue preservation, maintenance and restoration projects which enable visitors, members and educational programs to thrive, Maritime Museum of San Diego is asking for the community to visit and support these on-going initiatives with membership, donations and volunteerism.