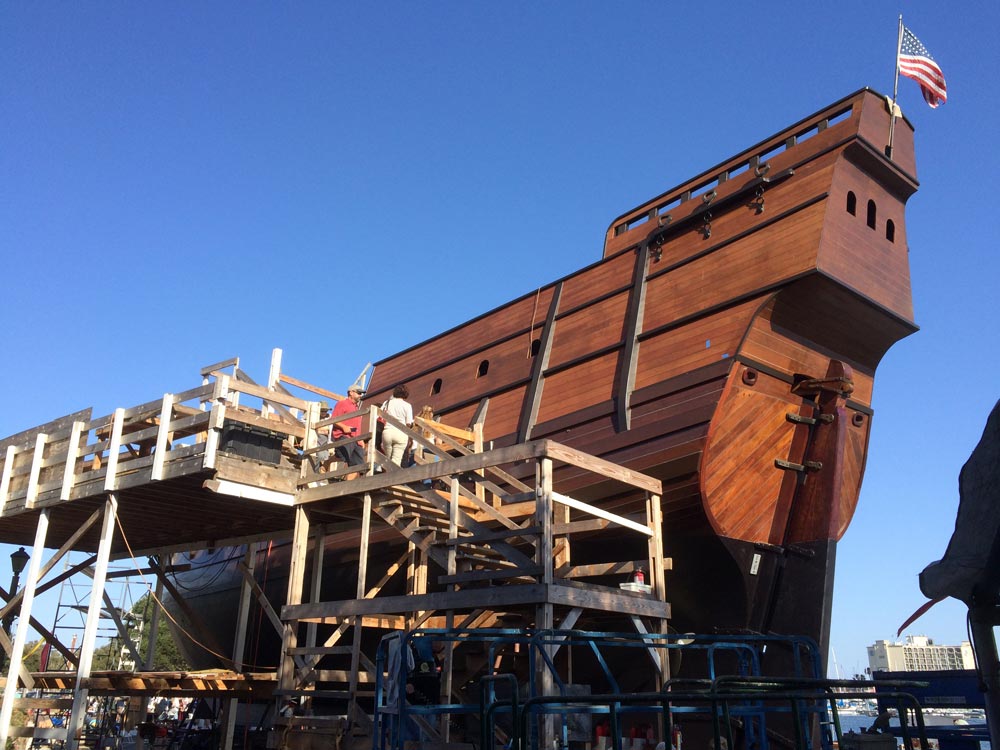 Maritime Museum members and many others who have followed the construction of San Salvador are aware that we had planned to launch the ship with a grand public ceremony on April 19 and that this event has been postponed. Since we announced the postponement on April 6, two weeks before the planned launching, we have received an unexpected outpouring of support, understanding, and, since the notice was short on details, considerable curiosity. After hundreds of conversations in response to questions, this message is an effort to answer some of those questions for those who may still be wondering why the launch was postponed and what happens next.

There are three events in the early life of a ship that traditionally present as occasions for public celebrations: laying the keel, launching, and commissioning (when the completed ship is now officially ready to embark on her career). We had always planned each stage in San Salvador’s construction to be so signified and indeed, the laying of the keel was a wonderful event that lived up to every expectation.

Had we built San Salvador in a shipyard equipped with slipways, cranes, and travel lifts, the ship’s launching would have been a normal technical exercise. Instead, we have built her in the parking lot of a bayside public park, with insufficient water depth right next to the shoreline to float the ship. It’s the most scenic location imaginable to build a ship and because of that decision, millions of people have had the chance to observe the embodiment of an American origin story take material form, and hundreds of volunteers have flocked to the site to participate in the experience. Yet, however successfully the location has contributed to those results, it nonetheless makes launching the ship more of a challenge and it seems that almost every person who has visited the site has understandably posed the question, “How are you going to launch her?” Indeed.

As it turns out there are several ways to launch such a ship, but only a few of them lend themselves to the kind of tightly scripted public event we wanted to share with the thousands of people who have contributed to the project and followed her story. Many months ago, we settled on primary and backup launch methods. Our favored scenario relied on use of a very sophisticated, self-propelled shipyard trailer generously offered for the Museum’s use by Marine Group Boat Works. The plan involved the delivery of the 90-foot device to the shipyard, a four-crane lift from the cribbing to the trailer and an overnight trek of more than two miles down Harbor Drive to Broadway Pier, removing signs, hopping curbs, and weaving around a bridge to that one deepwater spot at the edge of the Embarcadero capable of bearing the weight of the ship and trailer. (Going the other direction toward Point Loma, the road would not bear the weight.) At Broadway Pier a floating crane generously offered by Pacific Tug would be towed into place and lift the ship into the water. As it turns out it was also the one floating crane in San Diego capable of lifting a ship of her launch weight, or so we anticipated.

To affirm the viability of this plan, in December 2014 we arranged to have the ship weighed by a company that specializes in weighing very heavy objects such as buildings. Their result of 131 tons relieved our concerns; the ship was even lighter than we hoped and well within the safe tolerances of the land cranes, the trailer, the roadway, the edge of the pier, and the floating crane. We continued construction and formulated our plans for a launching on April 19, a day favored by two good high tides at convenient times and no competing uses of Broadway Pier.

The week of March 9 our engineer was double- and triple-checking calculations and thought that the results returned by the weighing exercise seemed simply too good to be true. We attempted to contact the weighing company to confirm their calculations but they couldn’t be reached and our phone inquiries went unreturned. We then contacted the manufacturer of the gauges used in the exercise and sent them high-resolution photographs taken by our documentary photographer at the moment when they registered maximum weight. The response from the manufacturer was shocking – the ship actually weighed 20 tons more than we had been told. Considering the weight we had added in continuing construction from December, we were now outside the safe limit for the floating crane. We briefly considered a two-crane lift but this was considered too dangerous – a wake, surge, or lack of perfect coordination between the two floating cranes might result in all the load suddenly shifting to just one of them with a potentially catastrophic result.

With six weeks before the planned launch, we now activated plan B. This involved a shorter trip down Harbor Drive to the U.S. Coast Guard Station San Diego that has a sea plane ramp built during the 1950s. In 1984 Californian had been launched in just that way, so, although 30 years ago, there was comparable precedent. I can’t emphasize sufficiently how much the community began to rally around the Museum to make this work. With very little notice the Coast Guard especially made every conceivable effort, fast tracking their permitting processes to accommodate the plan. We did a bathymetric survey of the ramp and adjoining bay bottom and a ground penetrating radar survey of the ramp and roadbed to determine if its condition was sufficiently sound to carry the weight, all of which were favorable. In this scenario, the ramp obviated the necessity for the floating crane, but there was one other problem: The motorized trailer could not under any circumstances enter the water. Thus, the cranes which lifted the ship onto the motorized trailer would then go to the Coast Guard air station to lift her off and then position her onto a wet trailer composed of several modular “dollies” for the final trip down the ramp, into the bay, and the waiting embrace of tugs standing by. By April 3 everything was in place.

Over the weekend of April 4 and 5 we received several unsettling calls from the mover who was to provide the wet trailer in accordance with planning for this backup scenario, a scenario formulated more than two years earlier and continually revisited and kept current. We learned, to our dismay, that the apparatus had evidently been sent to Northern California and would have to be retrieved; the structural condition of the apparatus was unknown but possibly compromised by rust; and a rebuild of the apparatus would be necessary, expensive, and in any event would not be certain of completion by April 19. The principal supervisor in this operation, moreover, confessed to nightmares in which the apparatus collapsed and the ship fell over. Clearly the prospects associated with this scenario were simply too problematic and we were now at our last possible moment to call off the planned event.

On April 6 we issued our notice of postponement and began planning for an alternative method of launching the ship. Again, my apologies to all of the many people who shaped their plans to be present at this once-in-a-lifetime event, only to be disappointed.

So what’s next? As mentioned earlier, we have several scenarios in development with the necessary engineering and analysis underway. All of them rely on the generously donated use of expensive equipment that will be available when not otherwise occupied and almost certainly at short notice. All of the technical service providers are in agreement that launching the ship can be done safely, but that none of the methods envisioned lend themselves to a tightly scripted public event with an audience, a program, and a timed agenda. Accordingly, we will not make a public announcement about when the ship will be launched or how that will be accomplished, though we will certainly document it. Instead, we will convey all of the ceremonial aspects of the launch to the commissioning, which will be a truly grand event, and doubly so now that anticipation has been thus heightened.

For the many people who have given their financial support, their time, and their interest to this incredible project I wish to extend my appreciation for that support and for the patience so evident in recent weeks. I also want to express how fortunate we are to live in the kind of community that rallies to its own so generously with every imaginable offer of assistance, technical expertise, and support, ranging from agencies at the State, County, City, and Port level to a spectrum of companies that span the breadth of the waterfront and many technical disciplines. They all want to see their ship launched and sailing proudly, and so they shall. Our bay is indeed one of the sacred places in the American landscape where we can truly say “America began here” and now, as if there were ever any doubt, we can certainly say the best of America still resides here.